The third and final part of the understanding the registration paperwork is super easy once you’ve got the top section figured out.It’s basically most of the same information given in the first two sections, but for the ancestors of the pig you’ve purchased. 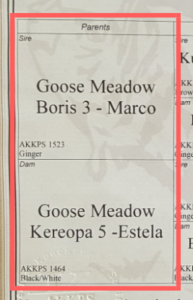 On the far left side of the page, the two largest boxes show the ‘sire’ (father) and the ‘dam’ (mother) of George. By reading their official names and looking at the bottom left hand corners of each of those boxes, we learn a lot of their information. For example, we can tell that George’s father was born on Goose Meadow Farm, he was the third Boris bloodline born on that farm, and they named him Marco. His registration number was AKKPS 1523 (so he was the 1,523rd pig registered through the AKKPS), and he was a ginger colored boar. We also learn that George’s mother was born on the same farm, she was the fifth Kereopa bloodline born on that farm, and her given name was Estela. She was a little older than Marco, because she was registered almost 1,000 pigs before him (AKKPS 1464). She was a black and white sow. 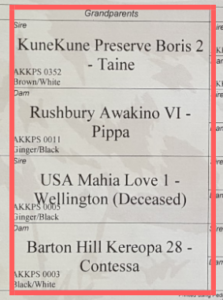 There are some pretty neat things to notice about George’s ancestry. For example, his maternal grandparents were the third and fifth pigs to ever be registered through the AKKPS! They were literally there at the start of the whole organization! Even his paternal grandmother was only the eleventh to ever be registered! This makes George a very valuable pig to us here at the farm. 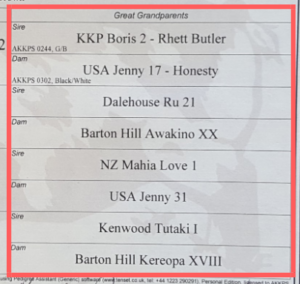 Notice that in the great-grandparents section, some of those pigs don’t have AKKPS numbers listed. This is because they were pigs that lived and bred before the creation of the AKKPS. They are some of the stock from which the AKKPS was originated. Pretty neat, huh?! You’ll also notice that the number parts of their names are larger. Rather than seeing only numbers like 1’s and 2’s, you”ll also see numbers like 20, 21, and 31. That’s because you’re getting into the older, more established farms when you go back this far. They are having many more pigs per bloodline than newer farms. And when you look at online pedigrees that show even older generations from the oldest farms, you’ll see numbers into the several hundreds!

Well, now you’re an expert AKKPS Registration Paper Reader! No need to be overwhelmed anymore when you try and look over your paperwork on a pig. In fact, now it may be fun for you to go through and see some of the history of your pigs! If you have any more questions about it, definitely leave a comment or send an email, and we’ll get back with you!

Here is a video that explains everything we just covered: