The Friendliest Pig On Earth

Do you remember Wilbur from Charlotte’s Web?  Poor, rambunctious little Wilbur that you wanted to pick up and hug? Or how about Porky Pig, with that cute little stutter and humble disposition?  Oh, and Piglet, from Winnie the Pooh.  Just the sweetest and meekest little thing.  All of these childhood favorites of ours created in our minds this picturesque idea of what pigs are like.  And then we saw them in real life and realized they’re nothing like we had dreamed them up to be!

So was the case for me, until I found Kunekunes.  The first pair of Kunekunes we bought came from a small farm in Louisiana.  They were everything we had read they would be, and we loved them.  The next pair we bought came from Virginia, on another small farm set-up.  They, too, were exactly what we had expected, and we couldn’t have been happier.  And then we came across a man from Tennessee who was selling his Kunekune pigs.  We were in the market for two specific bloodlines, and he had both.  So after some discussion,  we arranged to meet him at his farm and buy his six month old gilt and one year old boar.  What we didn’t realize until my husband and sons arrived at his home that day, is that his small herd of Kunekunes was fenced inside a pasture that was blocked off towards one side of his 127 acre farm, basically segregated from everything.  These pigs had been born on his farm and, as he informed my husband, had very minimal contact with anyone or anything outside of the herd.  They were basically totally wild.

As you can imagine, Steven was a little worried on his way home, not knowing what to expect.  When he filled me in over the phone, I had the same concerns.  We’ve had experience with other animal breeds that came from all sorts of farm set-ups, and knew very well that with time and gradually increased contact, we had a very good chance at ‘taming’ the pigs, if needed.  It may just take a little patience.  So we both prepared mentally for what may lie ahead, and I waited for all my men to come driving down the driveway with our newest farm additions. 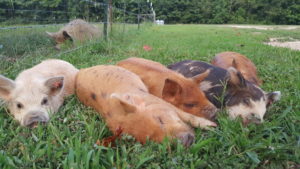 Finally, I could see the truck driving up to the pasture gate.  We planned to release the pigs into a small pen inside the pasture, so that we could let them get use to their new home, and also so that the other pigs could get acquainted with them through the paneling.  I had never been around such wild Kunekunes before, and couldn’t help wondering what differences I would see.

Well, we opened them up to the pen, with Steven and I inside, and I held my breath a little.  They slowly meandered their way out, the same as all of the other pigs had done.  I let out a little sigh.  We watched them for a short while, and they were walking around, exploring their new territory, occasionally stopping for a mouthful of grass.  So far, there was no difference at all.  It was the same docile, easy-going temperament that I had seen in every other Kunekune I owned.  And then we decided to try petting them.  This was the real test.  They had never been petted before.  They had probably never been this close to people before, either.  Would they run and squeal?  Would they panic?  Time to find out.

Steven walked up to the gilt while she was nibbling away at some grass, and started petting along her back.  She didn’t flinch.  He continued rubbing up towards her ears and the back of her head.  She just kept grazing.  And then he began giving her a belly rub, and she loved it.  It was amazing!  And it went exactly the same way with the older boar!  We were amazed and relieved and excited all at the same time!  These were the most wild Kunekunes we’d ever seen, and basically as wild as they can get, and the very first time we petted them, it was no different than if we had been petting them since they were piglets!  That’s when I fell even more in love with this breed of pig.  They are naturally the friendliest pig breed on earth, and I can attest to that first hand!  It still amazes me when I think about it.

Today, Huck and Dixie (as we named them that day), are happy and well here at our farm.  They are the same today as they were the day we brought them home, which is a huge testament to how friendly and peaceful they are in nature, regardless of their environment.  Now, cute little Wilbur and sweet little Piglet can be a little more realistic in my mind; I just imagine that they must have been characters inspired by Kunekunes!