Teat Alignment: Important or Not?

As kunekunes have become increasingly popular over the years, more and more people are turning to the internet to research the breed and get an idea of what they should look for in their future kunekune purchases.  And research is always a good thing to do.  However, because there is such a range of information that can be tapped into, confusion and improper emphasis can easily and unknowingly be placed on various factors.  For this article, the specific trait being discussed is ‘teat alignment.’

To start with, let me clarify:  the question I’m seeking to help answer is whether or not unevenly spaced/numbered teats is an indication that the kunekune in question is desirable as a breeder.  Should they be culled, or passed over when selecting a piglet to purchase?

It’s important to make this clarification for one very big reason:  We are determining the importance of this trait for breeding kunekunes.  “Breeding Quality” is different from “Show Quality.”  Let me say that in other words:  If you’re looking for a kunekune to take to shows and win ribbons, then teat alignment would be an important factor.  But outside of that purpose, we must establish that the factors that make a kunekune ideal for breeding will be inherently different that those that make it ideal for showing.

So with that being established, lets get back to the question:  “Are unevenly spaced/numbered teats an indication that a kunekune is undesirable as a breeder?”

In short, the answer is:  “Absolutely not.”  A sow need not have a symmetrical teat line to adequately nurse her piglets.  Most of the time, a sow will have anywhere from 10-14 teats.  The average litter size is around 6 piglets.  99% of the time, there will be teats that go dry from non-use.  Also, many times there will be incredibly prolific mommas who have a ‘dead teat,’ or one that never even has opportunity to be used.  In either case, the sow is not restricted in her milk production, or her ability to feed her piglets, even if the litter is a large one. 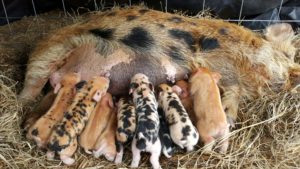 As a breeder, I can tell you that when selecting my breeding stock, I have never considered teat alignment.  I’ve also traded with/sold to other well-established breeders, and the question of teat alignment has never been asked by them.  It is not something that breeders concern themselves with, because we know it has no bearing on a sow’s ability to mother/nurse, or a boar’s ability to produce top-quality offspring.  The only time teat alignment is brought up as a concern is from a customer who has either never owned a kunekune, or is very new to owning them, and they are relying completely on suggestions from online sources.  Those sources aren’t necessarily wrong, but they are misleading.  Misleading because they don’t clarify that what they are describing as the ‘ideal kunekune’ is the ideal for SHOWING, not for BREEDING.  So, my suggestion would be this:  allow what you find online to weigh less in your mind than what you hear from established, experienced breeders.  Those that work with kunekunes on a daily basis, and have for years, should most definitely carry the heavier weight between the two sources.

AN ELABORATION ON THE TOPIC:

First and foremost, the most basic understanding that Breed Quality and Show Quality are two inherently different things must be established. Why is that? Because one focuses on aesthetics and appearance, while the other focuses on vigor and health. One person commented that spending time with piglets in a farrowing stall is a good way to see what they need, and I totally agree. And from doing so, a person could actually make a very strong case for uneven teat alignment, because if the teats were offset from each other, piglets could actually have an easier time nursing because they wouldn’t have to be piled on top of a littermate that is trying to nurse on a teat directly below the top teat. I only give this as an example of where symmetry and beauty, or even human preference, does not always correlate with ‘perfection,’ which is the ultimate goal of those attempting to cull and deem what traits to attempt to eliminate. And this brings me to another point. Unfortunately, the vast majority of people don’t have a solid understanding of how genetics work. In their mind, they are adding to the breed when they attempt physical perfection in their eyes. So they cull based on factors like symmetry and spacing. However, genetics are never added to. When you try to mold a breed to look a certain way, what you are actually doing is removing genetic information. This can best be seen in dogs. A wolf, or even a mut is, genetically speaking, several times over more vigorous and healthy than a ‘pure bred’ dog. This is why great danes can’t live past a decade or so, and why yorkies all look like clones. They have such depleted gene pools, and could never survive outside of a domesticated environment.

We must be careful not to do the same thing to the Kunekune breed. One of the biggest draws to this breed is that it is a heritage breed. It hasn’t been commercialized. This is why, as a whole, kunes are incredibly vigorous and genetically diverse, especially compared to modern breeds. This is best seen in the variety within the breed. All of the color patterns, size differences, hair types, etc. They have a very diverse gene pool. So when we, as breeders, attempt to cull and commercialize them, we weaken the breed and take away from the original appeal.
So should we cull at all? Of course. But based on things that actually matter to the vigor of the breed. If you have a sire that has a tendency to pass on hernias to his offspring (umbilical, scrotal, etc), he should be culled. If you have a momma that, with several attempts at farrowing, will not mother her piglets, she should be culled. A Kunekune that cannot survive on their natural diet of pasture could justifiably be culled. Is your sow careful not to crush her piglets, i.e. a good mother? These are the factors that matter when it comes to BREED QUALITY Kunekunes. They have nothing to do with whether or not the teats are spaced evenly, or if the Kunekune has a desirable hair length, or if a Kunekune has wattles. Those things are superficial and only matter if you want to win a ribbon. But they have no bearing on what qualifies as a Breed Quality Kunekune.