At this point in life, there are few times where I am just completely blown away with the feeling of, “I had no idea that was possible.”  I attribute that to two things: knowing the Lord, and the fact that I have six children ages 10 and under.With a brood like that, you’re rarely amazed at a predicament, but rather, when the unexpected happens, your mind moves directly past wonder, and straight on to, “Ok, how do we fix this with what we’ve got?”  From toys being jammed into places that seem geometrically impossible to have even fit them into, to little legs being wedged into places that you fight the urge to debate whether or not they really need that foot…needless to say, it has been some time since I felt pure amazement at any given circumstance.  And then we had a litter of Kunekune piglets.

Everything was wonderful and exciting and miraculous.  The farrowing was easy for my sow, Betsy.  She’s an incredible mother, and she took very good care of all nine of her newest piglets from their very first moments.  The litter grew in size and cuteness, quickly becoming my children’s new favorite animals on the farm.  And then came time to DNA test each of them for registration.

For half of them, the results came back as expected, Betsy was named the dam and our boar, Bentley, the sire.  But for the other half, the sire was left blank, with a brief description stating that Bentley was definitely not the sire.  “What???  But they’re all brothers and sisters?!  There’s got to be something wrong with the test!”  These were some of my thoughts as I called the DNA lab.

A very nice woman on the other end of the phone line simply asked me if I had any other boars.  “Well, yes, we also have a boar named George.  But Bentley (our dominant male) won’t let him anywhere near the sows.  And besides that, we know for certain that Bentley is the one who bred her back, because half of the other DNA tests confirm it,”  I said, feeling sure that with all of this new found information, she would be as startled as I was.

Nope. Without being the first bit thrown off, she asked me to give her my other boar’s DNA case number (all of our Kunekunes are registered through the same genetics laboratory). Less than 15 seconds later is when I heard it.  “George is the sire of the other piglets.”

Wait. What? W….What?  Two sires for one litter?  Is that even possible? 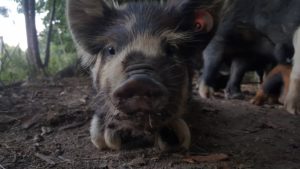 Yes, it is. And the geneticist said that it happens more often than you’d think.  If a sow is in heat, she can have MULTIPLE boars breed her back.  And apparently, a fence line isn’t enough of a separation.  A sow can back up to the fence, and the boar will breed her through the fence, she said.   She also warned me that she sees DNA results often times where a sow is bred back by her own piglets.   “If your piglets are more than 3 months old, and she goes into heat, they can breed her back.  Not while she’s standing up, but whenever she lays down, they can reach her.”

At this point, my mind had gone blank.  I just couldn’t believe what I was hearing.  What I did take away from the rest of our conversation was that in the future, when I submitted any piglet for DNA testing, I needed to list every single boar that I owned as a possible sire, because it is very likely that if the sow is within range of multiple boars, hers will be a “multi-sire litter.”

So, if your hope is to carefully plan out bloodline crosses between your Kunekunes, let me be the first to suggest that you separate your breeding pairs from the rest of your boars, and do so by more than a line of fencing.  Otherwise, you may find yourself with a litter of piglets who have totally different sires, and you may even get into “my uncle is my dad is my brother” kind of crosses!