What is every homesteader’s dream animal?  The kind that is self-sustaining.  If it can

A.) forage for its own food

B.) deliver and take care of its own young, and

then it will—without a doubt—be your most valued animal.  Over the last decade, we’ve had several different types of animals, and within those animal groups, we’ve also had a number of different breeds of each.  We’ve raised 2 types of cows, an innumerable amount of chicken types, six different pig breeds, two different kinds of turkeys, three types of sheep and one breed of goats.  And here’s the bottom line:  When you’re answering whether or not your animals are self-sustaining, most of the time, the answer isn’t “Yes” or “No.”  Most of the time, it’s more of a 1-10 scale type of answer.

For example, I would say that my cows are nearly 100% self-sustaining.  I do very little for them on a daily basis.

However, I must keep a supply of mineral salt available, as well as hay in the winter.  If we had a large herd, I would likely have to do more in terms of disease control.

My sheep are probably the most self-sustaining animals that I own.  They don’t require special attention on anything in particular.  This is due to 1.) the type of land that we are on (plenty of open pasture and wooded area for them to forage), and 2.) the fact that we have a very small herd.  Again, with increased herd size comes a greater need for things like disease control.

Now, for the animal breed of interest:  Kunekunes.  Are they self-sustaining?  I would say that generally speaking, yes, they are.  However there are a few “*‘s” that should go along with this statement.  So here they are:

*You have plenty of grass growing year-round.  I’ve had customers that live in Hawaii, and never need to worry about a shortage of grass.  Others live where there are 4 months of no grass growing every year.  In these cases, you either sow grass seeds for the fall months, or you plan to feed your pigs.

*They have been raised on grass.  This was one lesson that I wish I would’ve learned from reading, rather than living.  If you buy a kunekune pig that is accustomed to being fed on a regular basis, then they will likely not be sustained on 100% grass once you get them home.  I have watched kunekunes lose so much weight, even when they were surrounded by acres and acres of shin-high grass waving in the wind.  They will still eat grass, but they won’t thrive on it.  The only way you can have a herd that thrives on grass is to basically breed them for it on your own farm.  You would have to basically take the attitude of “Whoever survives on the pasture, survives.  And whoever doesn’t, doesn’t” for the first couple of generations.  And depending on a number of different factors, you may decide that’s best for you.  But most of the time, whether it be from pity or from financial investment, people simply opt to feed them.  The good news is, that even just two or three cups of feed per day will sustain a kunkune in the winter time, and less than that during the spring and summer.

B.)  Kunekunes can deliver and care for their own young IF:

*You provide adequate farrowing conditions.  Read some of my suggestions here. 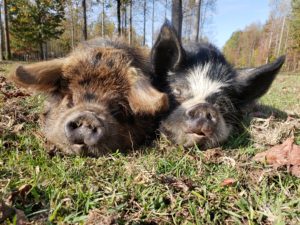 * You have a small enough herd that was originally healthy and free of parasites when you bought them, AND

* You keep your herd small, with ample pasture space per pig.

If you fail in any of these, you’ll likely end up having to de-worm your pigs and/or medicate them for other parasites like mites.  If you have a large herd, it is extremely important to stay on top of things when it comes to disease control.  Things can get out of had quickly if you don’t.  With small herds, I wouldn’t worry much about it at all, though.  Kunekunes are truly remarkable and healthy animals when given the right environmental conditions.

So there you have it.  Kunekunes are a relatively self-sustaining animal, depending on a few factors.  The smaller your herd, and/or the larger your pasture areas for them, the more self-sustaining they will be for you.  And this is pretty much the rule of thumb with a lot of different farm animals.