I’m sitting here trying to decide which was worse…the journey to finding the perfect farm dog, or the journey to finding the perfect pig? It’s just too close of a call.They were both miserable and frustrating! If I’m totally honest, this is actually my second attempt at writing about this subject. The first draft included stories about each dog breed that we tried before finally finding the perfect one for us. It told of a few memorable experiences with each individual dog (or set of dogs) that best depicted the overall trials and tribulations we faced with them. After my not-so-fond nostalgia began pouring over into the third page, I realized it was probably a little much. For the sake of anyone who reads, I’d be better off to do more of a summary of what we learned. So that’s what this is…a summary; or, better yet, a translation. I want to interpret what you read about a dog breed online, into a realistic understanding of what it actually means. So hopefully this will help you avoid a few of the bumps we faced…and trust me when I say, I have pages worth of reasons for my personal interpretations!

So here are some common terms or phrases you’ll come across…along with the “KaTrina Brown” interpretation:

*Livestock Guard Dog (LGD): a dog breed that is no threat to large animals, but finds smaller (free-range) livestock—namely any sort of bird (chickens, turkeys, ducks)—to be a flock of buffet-style eating.
*Pastoral dogs; will guard a large number of acres of land: a dog that roams your land, your neighbor’s land, and their neighbor’s land (if not fenced in and contained). Don’t be surprised if they come home with someone’s deer carcass during deer season, or if they come home bloody after being grazed by a car on the street.
*Confident and Fearless: more stubborn than other breeds; not easily trainable compared to dogs with a more meek disposition. They can absolutely be trained, but expect it to take a lot of consistency, commitment, and strong-willed determination from you (compared to training other dog breeds).
*Watch dog; active at night, guards against nocturnal predators: expect barking all through the night, even in the absence of predators. Barking is used as both a warning and a deterrent against possible predators. You will likely find out if your neighbors sleep heavy, with a fan running…or not.

For the record, in our search for the perfect farm dog for our setup (which includes free-range cows, sheep, pigs, turkeys, chickens, and ducks), we tried out the following breeds:
*Great Pyrenees          *Anatolian Shepherds          *German Shepherds

We had them as single dogs, and then in pairs (hoping that maybe a companion would alleviate some of the issues we were facing). It didn’t. 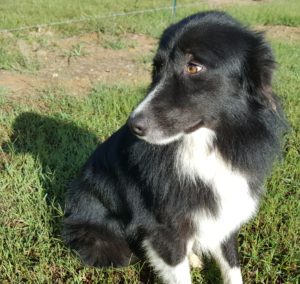 What we finally found to be perfect for us was an Australian Shepherd/Border Collie mix. We named him Jake, and he’s absolutely the best dog we’ve ever had. He’s also the smartest dog we’ve ever had. Here are the things we love about him; the things that make him perfect for us:
*He’s incredibly smart and meek (easily trainable, and when he’s corrected it rarely takes more than once or twice for him to accept the new rule).
*He stays on our property, even at night (that’s not to say he doesn’t go visit the neighbors dog when they let her out every once in a while, but by no means does he roam the surrounding areas)
*He’s alert through the night, but doesn’t feel the need to bark continually as a reminder to all of us. We will occasionally hear a bark, which tells us he’s sensed something in the woods. But then it’s over when the threat has been frightened away.
*He’s a medium sized dog (manageable feed bill)

*He’s as much of a family pet as he is a farm asset. When we are all in the house, Jake can be found walking around the pasture, checking on—and sometimes herding for fun—the farm animals. But as soon as any of us go outside, he’s right there by our sides, tagging along to play with the kids or to help us round up some cows. He’s seriously a great dog;  so if you ask me what dog breed I would recommend for a similar setup to ours, you can bet it’ll be an Australian Shepherd/Border Collie mix!