Life Lessons That Started With Slaw

I remember back when Steven and I were dating, and I was about to go to my very first family picnic with most of his extended family. I was especially excited because we had been dating long enough at this point that I had been assigned a dish to bring.

This was big for me. It was more than “slaw” in my eyes; it was more like a sign of validation. I was bringing a nice big bowl of “I’m basically part of the family now!” 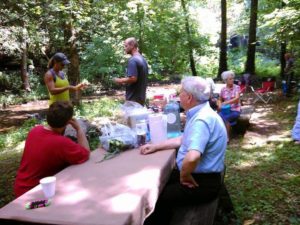 Looking back, I realize that Granmother had assigned slaw to me out of consideration; she knew I had, eh, ‘limited’ experience in the kitchen, and slaw is a no-cook, basic ingredient side dish that requires little more than a bowl and a spoon to make. It’s a no-fail. Well, at least she thought so. Me, on the other hand? I had never made slaw, so I did what anyone my age would do in that situation. I Googled it.

I should also mention one big factor. Growing up in the city for most of my life, I don’t remember EVER having slaw served as a side dish at any meal that my family made. Never ordered at restaurants. Never a part of holidays or reunions or ‘get-togethers’. My family just wasn’t a fan of it, so it never got made. This means that when I came across recipe options, I really had no idea what was ‘out of the box’ or ‘unusual.’ I just knew I didn’t want something that said “Basic Cole Slaw Recipe.” I needed to impress here! This was a big moment for me; definitely not a time to serve anything ‘basic.’

So I found what looked to be the perfect recipe. 5 star ratings, professional pictures, sponsored by an esteemed chef. I mean, this was going to be the best slaw anyone had ever had. I don’t remember much about the recipe now, other than it called for vinegar. And lemon juice. Oh, and like 5 or 6 different spices. It was gonna be a project; but nothing was going to slow me down! 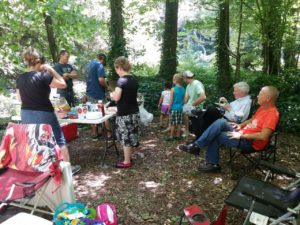 So the day of the picnic arrived. I worked and I mixed and I chilled. In the end, I brought a huge aluminum pan piled high with my very ‘NOT basic’ cole slaw. I set it out on the food table, uncovered it with inward pride bubbling, and waited anxiously for people to start digging in. In my mind, I imagined people loving it so much, they preferred more slaw over dessert! I was coming into this family with a ‘bang!’

Oh the looks on peoples faces. Bless them! They did their very best to not show surprise at my….um….invention. Many of them even went so far as to put some on their plates! I honestly didn’t even realize anything was off until it was time to leave. I was carrying nearly as much cole slaw home as I had brought! But why?! It was rated 5 stars?!

Steven did his best to try and find the good in it. I’m pretty sure he even managed to eat most of what I had put on his plate for him. I found out later it was no easy task. See, I never tasted the cole slaw before bringing it to the picnic. I made it exactly like I read it. But I was still carrying the habits of my side of the family…claiming not to be a fan of cole slaw. “So tasting it wouldn’t do any good, because even if it was perfect, I wouldn’t like it,” I had told myself. Goodness gracious.

It was on the ride home that I asked Steven about it. “Did you like the slaw I made?” I asked him. “Yeah…” he said with a shaky, unconvincing tone. The kind that sounds more like a question than an answer. You know the tone. “I mean, I’ve just never had any like that…but, I mean, yeah…it was good.” The unconvincing tone continued.

“What do you mean? It was different than what you’re use to?” I asked. I mean, I knew it wasn’t ‘basic,’ but I was starting to get the feeling it was ‘alien.’

“Was there vinegar in it?” he asked. Uh-oh. He knew there was vinegar. That can’t be good. I started panicking a little on the inside. “Oh no! Did I really just bomb that bad?! With his WHOLE family!?!” That was the jist of the thoughts racing through my mind.

I looked at the foil-covered mountain of food in the back seat, and then back at Steven, and replied, “Yeah, there was vinegar…” My voice faded a little as I looked forward and sank back into my seat, “…the recipe called for it, though.” A short pause later, and then I looked at him and asked, “What are you use to?”  Steven, treading carefully to not hurt my feelings, kind of shrugged and said “Granmother just uses mayonnaise, with a little salt and pepper. So that’s just what everyone is use to. But that doesn’t mean yours was bad. Don’t worry, babe.”

But it was too late. The worry had set in. This was horrible! When we got home, I had to try it—and oh, it was awful! Seriously awful!! This was so bad!!

I learned three very valuable lessons from my experience that day:

1.) When it comes to slaw, simple is definitely best. Definitely.
2.) Always—always—ALWAYS taste your food before serving it!
3.) The kind gestures shown by his family to eat at least some of what I had concocted sincerely touches my heart! It’s how I will be when my future daughter in laws begin bringing their first dishes to family dinners; I hope I never forget those early years in the kitchen! 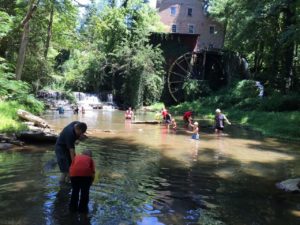 Another embarrassing, but cherished memory of mine. And it turns out, of course, Granmother’s recipe is perfection. I’d like to report that I have since been converted, and am now a lover of slaw! And Granmother’s recipe is the only recipe I use. So, it only makes sense for me to leave you with it (The Best {Basic} Slaw Recipe). Note that it isn’t a ‘cole slaw’ recipe. If it’s simple (basic), and real, and perfect, and delicious, it’s “slaw.” This is one of those things where basic is definitely better! Trust me!!